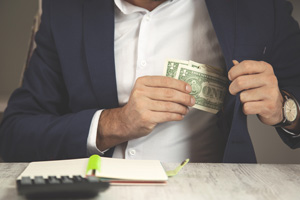 An embezzlement is a form of theft that occurs when a person unlawfully takes property that they had legal access to. Thus, the original taking may be lawful, such as an employee being entrusted with company money but subsequently keeping the money for themselves. There is no specific embezzlement offense under Texas law; however, it is grouped under the broader category of Theft codified into law by Penal Code Title 7 Chapter 31. If you have questions, our Houston Embezzlement Lawyer can answer them for you.

PENALTIES FOR EMBEZZLEMENT IN HOUSTON

Less than $100 – classified as a Class C misdemeanor punishable by a fine not to exceed $500.

Less than $750 but more than $100 – classified as a Class B misdemeanor punishable by a fine not to exceed $2,000 and up to 180 days in jail. A person may also be charged with a Class B misdemeanor if the value of the property stolen is less than $100, and they have a previous conviction for theft or the property stolen was a driver’s license or personal identification.

More than $300,000 – classified as a 1st-degree felony punishable by imprisonment for life in the Texas Department of Criminal Justice or for a term of 5 to 99 years and a fine not to exceed $10,000.

There are a number of aggravating factors that may increase the penalties for theft under Texas State Law. For instance, if the owner of the stolen property were an elderly individual or a non-profit organization, the sanctions would be increased to the next higher category. Previous convictions, appropriation of a controlled substance, or taking of livestock can also increase the consequences of theft under Penal Code Section 31.03.

PROVIDING A STRONG DEFENSE AGAINST EMBEZZLEMENT

Embezzlement, theft, or fraud charges are a serious crime that can cause you the loss of your job, your professional license, and your freedom. If you have been charged with a white-collar crime in the State of Texas, you need an experienced Houston Embezzlement Attorney that will fight hard to protect your rights. Several defenses arise in fraud cases, including mistake, lack of intent, and rightful ownership. If you have been charged with fraud or theft in an embezzlement case, you need to contact our Houston criminal defense attorney in Houston, TX today.

“… the fraudulent appropriation of property by a person to whom it has been entrusted, or into whose hands it has lawfully come; and it differs from larceny in the fact that the original taking of the property was lawful, or with the consent of the owner, while, in larceny, the felonious intent must have existed at the time of the taking.”

A federal indictment on embezzlement charges can affect your entire life.  Depending on the circumstances of the case, you could lose your financial security, your freedom, and your future.  You need the help of a knowledgeable defense attorney to fight the charges and defend your freedom. Attorney James Alston is a board-certified criminal defense lawyer in Houston, TX.  He has worked as a Harris County District Attorney and a federal prosecutor.  He understands how prosecutors prepare for trial and will develop a strategic defense in your case.

Attorney James Alston is a leading Houston Embezzlement Lawyer. He is board-certified by the Texas Board of Legal Specialization and is a former state and federal prosecutor. Mr. Alston is well-respected by fellow attorneys, opposing counsel, judges, and court staff throughout Houston, TX and the surrounding area. He represents clients facing both state and federal charges.

As a prosecutor with the Harris County District Attorney’s Office, Mr. Alston was assigned to the Major Fraud Division, where he investigated and prosecuted numerous white-collar crimes including theft, embezzlement, Medicare fraud, health care fraud and mortgage fraud cases. Find out why James Alston Law is rated 10 of 10 on Avvo and has been recognized as a leading defense attorney in the State of Texas. Contact James Alston Law today at (713) 228-1400 to schedule your consultation.