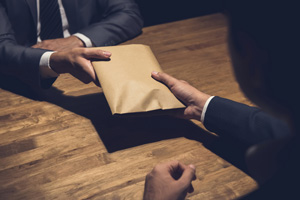 Comprehending the laws for cases involving bribery is one of the specialties of our Houston bribery lawyer. James Alson Law can navigate the legality behind the Federal laws. According to the Federal Bribery Statute, 18 U.S.C. § 201(b) it defines the act of bribery as:

Elements Of A Federal Bribery Charge

In order to prove that a person violated the federal statute on bribery, a prosecutor must prove that the defendant:

The prosecutor must show that there was a quid pro quo meaning that the thing of value was given with the specific corrupt intent to influence an official act.

A person convicted on charges of federal bribery may be fined, or imprisoned for not more than fifteen (15) years, or both. Call our Houston Bribery Lawyer if you have questions.

Acceptance of a Bribe by a Public Official

The federal bribery statute also prohibits the acceptance of a bribe by a public official.  Under 18 U.S.C § 201(b)(2), a public official who “directly or indirectly, corruptly demands, receives, accepts, or agrees to receive or accept anything of value” may be guilty of receiving a bribe and punished with imprisonment, a fine, or both.

Under this statute, a prosecutor must show that the defendant:

18 U.S.C. § 201 (b) also makes it unlawful to bribe a witness or for a witness to solicit a bribe in exchange for their testimony or lack thereof.

A separate but related charge includes the offering and acceptance of gratuities to a public official.  As with bribery charges, the prosecutor must show that the gratuity offered or accepted was a thing of value and only applies to federal public officials.  Unlike bribery charges, there is no requirement of “a quid pro quo or a corrupt intent to influence an official act.”  Additionally, the federal statute on gratuities (18 U.S.C. § 201(c)) requires that it be paid personally to the public official.

Bribery On The State Level In Houston

Texas Penal Code Section 36.02 makes it unlawful if a person “intentionally or knowingly offers, confers, or agrees to confer on another, or solicits, accepts, or agrees to accept from another” any benefit as consideration for the recipient’s decision, vote, recommendation, opinion or other exercise of discretion. Bribery is generally prosecuted when it involves a:

Penalties for Bribery in the State of Texas

In Texas, bribery is considered a 2nd-degree felony. According to Penal Code Section 12.33, a conviction for a felony of the second degree is punishable by “imprisonment in the Texas Department of Criminal Justice for any term of not more than 20 years or less than two years” and a fine of up to $10,000.

A person may be charged with a felony if they attempt to influence or coerce a witness:

A person may be charged with a Class A misdemeanor if he “offers, confers or agrees to confer any benefit on a public servant that he knows the public servant is prohibited by law from accepting.”

Houston bribery lawyer James Alston understands that most people are not hardened criminals. He vigorously defends the rights of his clients. If you are charged with bribery in Houston, TX, you need a knowledgeable lawyer that will fight hard to get your case reduced or dismissed. Attorney Alston is a former Harris County District Attorney and former federal prosecutor who knows how to win cases. He is a seasoned litigator who will not hesitate to take your case to trial. Contact James Alston Law today at (713) 228-1400 for a consultation.