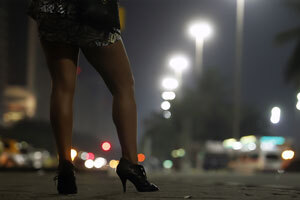 Prostitution is known as an offense against public order and decency. It is listed under Chapter 43 of the Texas Penal Code. Sec. 43.02 (a) states that a person may be charged with prostitution if he or she “knowingly offers or agrees to receive a fee from another to engage in sexual conduct” or (b) “knowingly offers or agrees to pay a fee to another person for the purpose of engaging in sexual conduct with that person or another.” Conviction of prostitution under these statutes can have serious consequences. Depending on the offense, you may be charged with a misdemeanor or a felony and could face significant jail time. Sex crimes of any nature are heavily prosecuted by the Harris County District Attorney’s Office. A Houston Prostitution Defense Lawyer can defend your rights when needed.

If you have been charged with prostitution, you need the help of an experienced Houston Prostitution Defense Lawyer. Attorney James Alston is a former state and federal prosecutor who has extensive practice handling sex crime cases. His time as a prosecutor taught him how to identify the weaknesses in a state’s case. Mr. Alston will represent you every step of the way, fighting hard to protect your reputation and your freedom.

How to Defend Against Charges Of Prostitution

To successfully defend against a prostitution charge involves strategy, know-how, and experience. James Alston will initiate several important actions in the early stages of your defense, which may include:

The Texas Legislature under Penal Code Sec. 43.05 says that a person  may be charged with compelling prostitution if he or she knowingly:

Compelling prostitution is a serious offense that can be charged as a felony in the first or second degree, depending on the nature of the crime.

If you are arrested for prostitution or a related charge, hiring the right attorney can be a daunting task. You need someone with specific knowledge about sex crimes and how the district attorney’s office will prosecute these cases. You need someone familiar with the local courts. You need someone with experience that you can count on. Our Houston Prostitution Defense Lawyer is a former Harris County District Attorney who understands the complexities of sex crimes. He knows how to build a strong defense for your case, no matter what charges you are facing. A conviction for prostitution can ruin your chances of securing gainful employment, it can embarrass you and your family, and it could land you in jail. James Alston offers some significant benefits to his clients, including:

I’ve represented many clients who have been charged with prostitution, including prostitutes or the Johns who solicit the prostitute.

I am handling a couple of cases now in which I represent clients who were accused of being pimps; they are charged with sex trafficking for taking adults and/or minors across state lines for the purpose of prostitution. I’ve also represented a madam in state court; she was charged with promotion of prostitution. There can be a lot of evidence in these types of cases, including telephone records, financial records, and statements from the prostitutes who worked for them. So, if you are charged with promoting prostitution or sex trafficking you need an attorney who has experience defending such cases.

If you are facing charges related to prostitution, whether the charges filed are a misdemeanor or felony, you need to ensure your rights and interests are zealously protected by a criminal defense lawyer you can trust. You want a lawyer who knows the justice system from the inside out – a former prosecutor. Call the law office of James Alston Law for help from a highly-skilled prostitution lawyer in Houston.